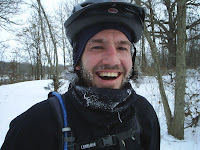 The extreme temps kept most riders away from the Smithville GG ride except for the most hard core including John Williams and myself. John is the proprietor of Pot Pie which offers "Home style Fine Dining in Kansas City". All I could think about during the ride was a nice hot Chicken Pot Pie. This and a a few layers of clothing was enough to keep anyone warm even in 1 degree temps. 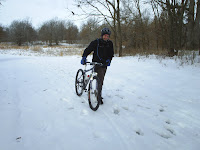 s and hopefully single track. The first 3/4 mile was not that bad with packed down snow from all the runners/hikers. After that it appeared the runners doubled back to their warm vehicles which came across our minds. This was John's second visit to Smithville with the first one being last years Bone Bender 3/6 Hour MTB Odyssey. If a person can overcome those conditions and finish then surely we could handle a little snow. The going was hard at times, but fun none the less. A combination of riding and walking was required. Times like these I kind of wished we had some XC skis instead of big old 29er tires.

The decision was made to head to Sail Boat Cove and then take W North to some of the gravel roads. But first we had to make it to SBC. Along the way we ventured into the single track when it was evident that some runners/hikers had packed down the snow. If not 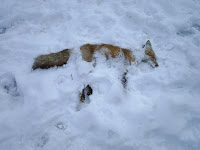 , then is was really hard going. At times you felt like you were not going to make it and end up like Mr Dead Fox. We happened upon this poor animal that froze to death.

Once we hit SBC we were able to pick up the speed and get some good riding in. Then we had some mechanicals. My new X9 shifter (1x9 setup) stopped working. Most likely due to the cold weather. Then while climbing one hill John broke his chain and we had to take a break to fix it. The cold really set in w 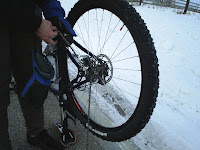 hile were stopped and it was approaching the 2 hour mark of our ride so the decision was made to head back. I went ahead and left John to fix his chain and went to get my truck just in case he could not replace the link.

Overall the cold temperatures really did not cause us any problems. Now all that snow was a different story....
Posted by dirtdobber at 11:04 AM