Update 2/12/15:  The weather for Saturday morning will be a little cold (30), but it will be dry.  Gravel conditions are very good with only a few sections of new gravel. The rest of the course is fast undulating gravel fun.  See everyone Saturday morning 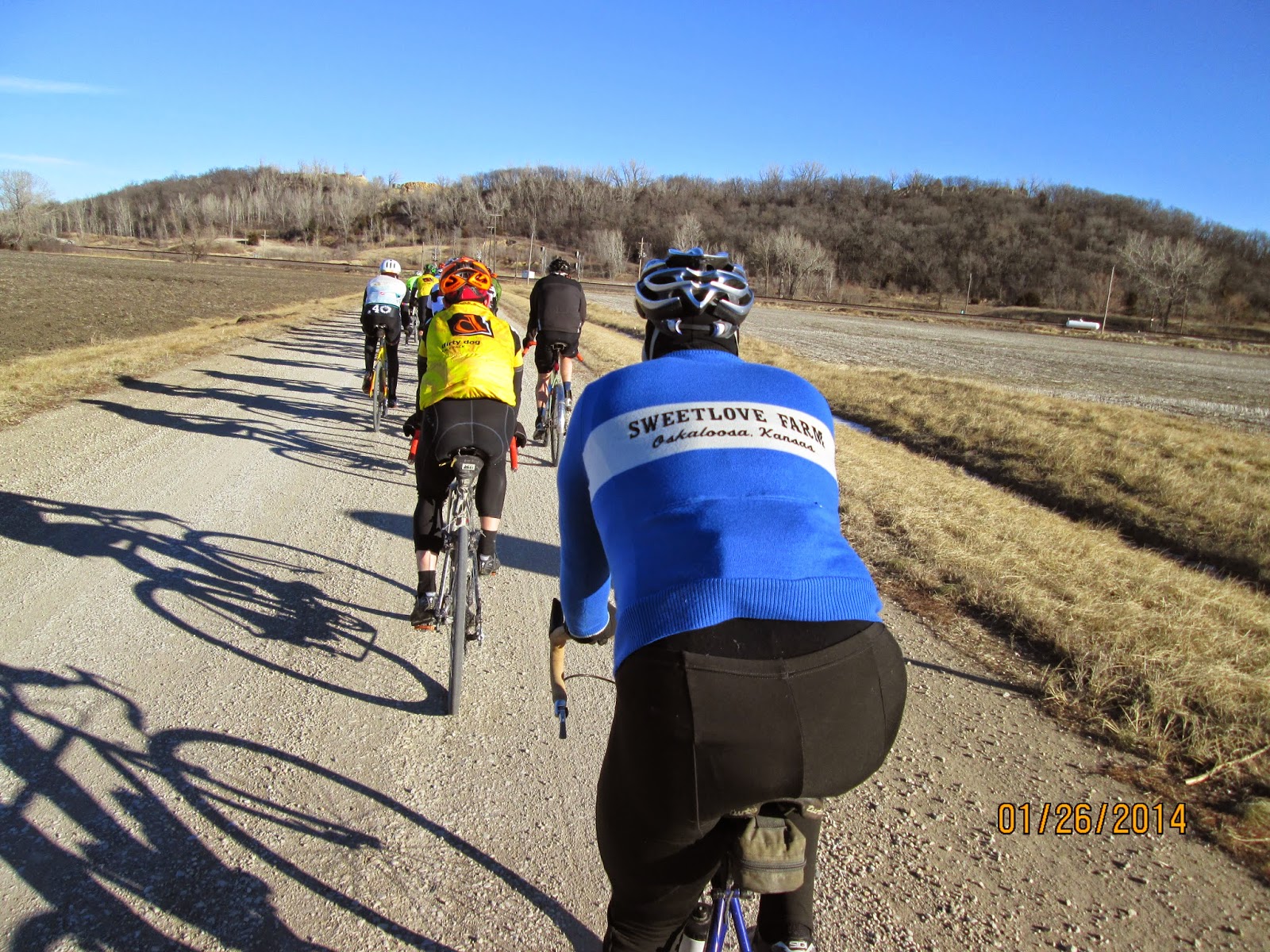 The 2015 Strada Grigia starts at 10:00am, Saturday, February 14th, from Sweetlove Farm, 13248 102nd Street, Oskaloosa, Kansas 66066. This is the home of race host Phil Holman-Hebert and his family. Strada Grigia is Italian for “grey roads” and the ride is meant to be a celebration of the grey gravel and typically grey weather of mid-February in Jefferson County, Kansas. 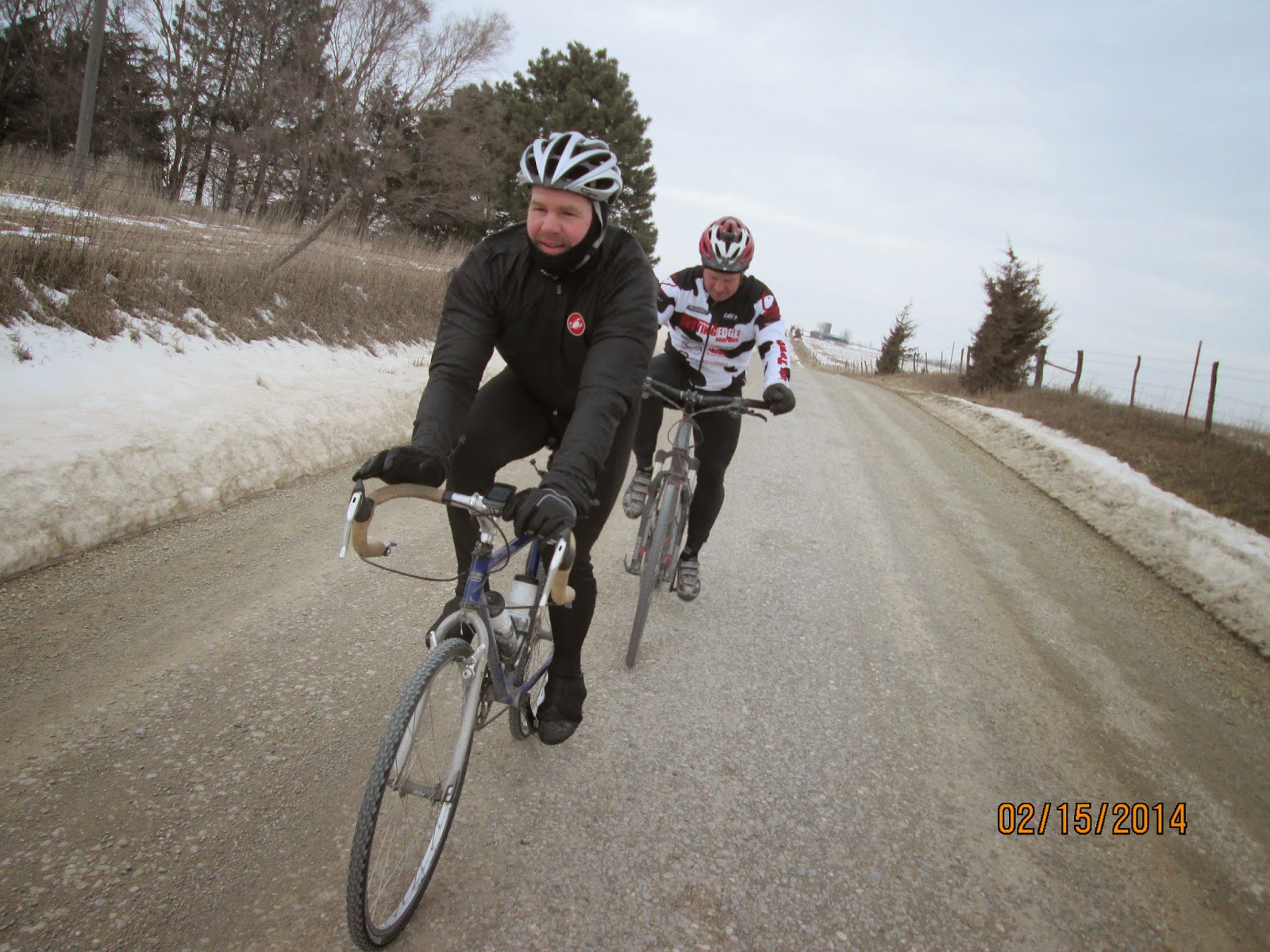 The full course is designed to take in as many of the challenging uphills as possible in this steeply rolling southeastern quarter of the county. For the fit or adventuresome, the full course can be a solid and enjoyable test. The short course will also present several steep obstacles, and a couple of fast descents, for those not interested in the long ride. Come and enjoy what I think are some of the best gravel roads anywhere. We’ve chosen a 10am start time to encourage those who might like to come from a little farther afield and in the hopes it might allow the morning to “warm up” a bit, in this, the dreariest month of the year.

Here are the two courses from Garmin maps.

**Remember, you are responsible for yourself and you ride at your own risk.  You are totally on your own.  There are no rider services.  There is no support. If you choose to participate, you agree to taking full responsibility for what happens to you out on the course.Always follow all traffic laws and rules. Always choose safety first and be prepared.**
Posted by dirtdobber at 3:28 AM No comments: 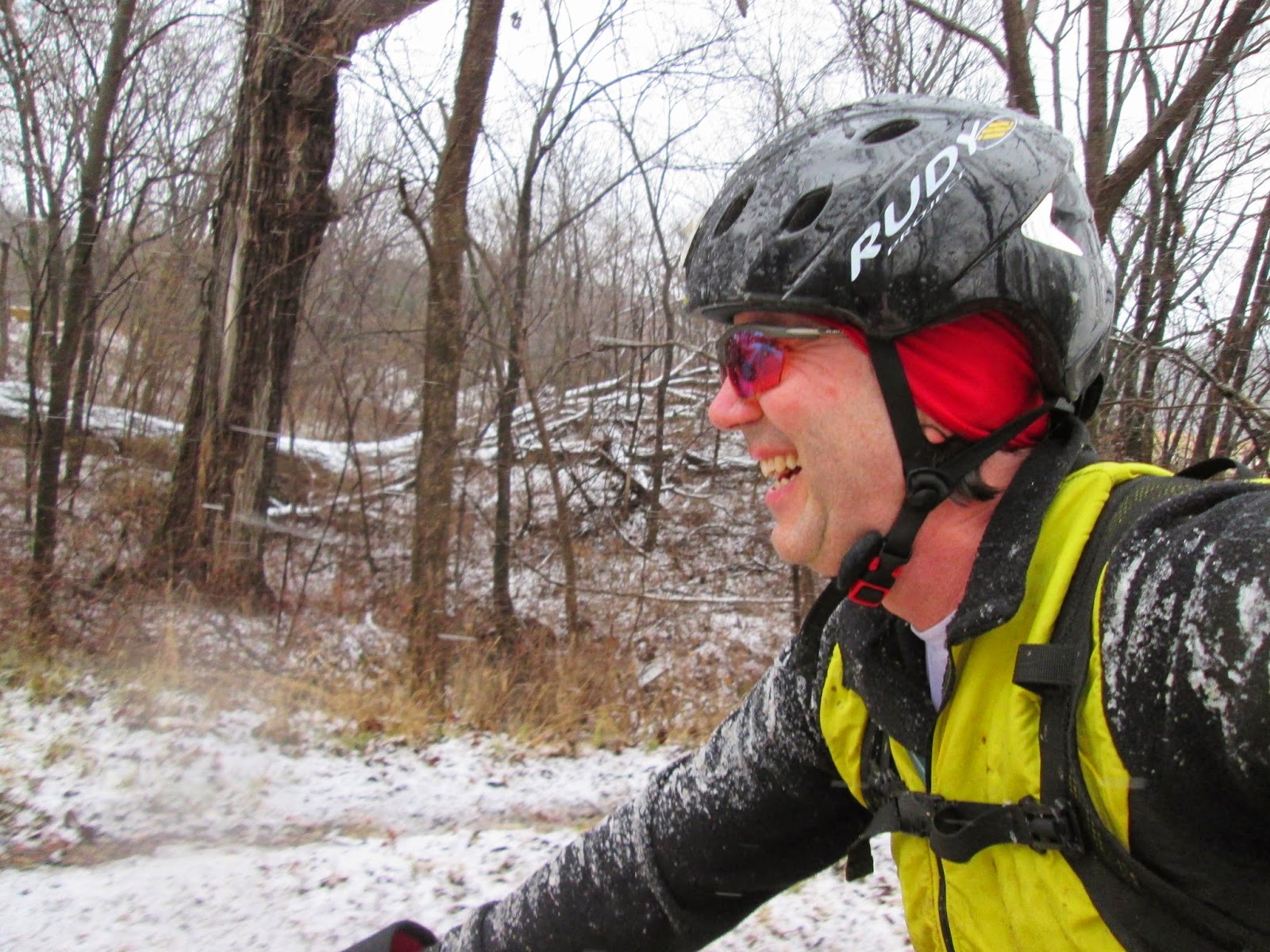 I just love conditions like this.  Why I still do not know, but I really enjoy riding on frozen roads.

13 brave riders showed up for today's Lake Dabinawa Gravel Ride.  At the end of the ride we all agreed to change the name to the Frozen Death Ride. 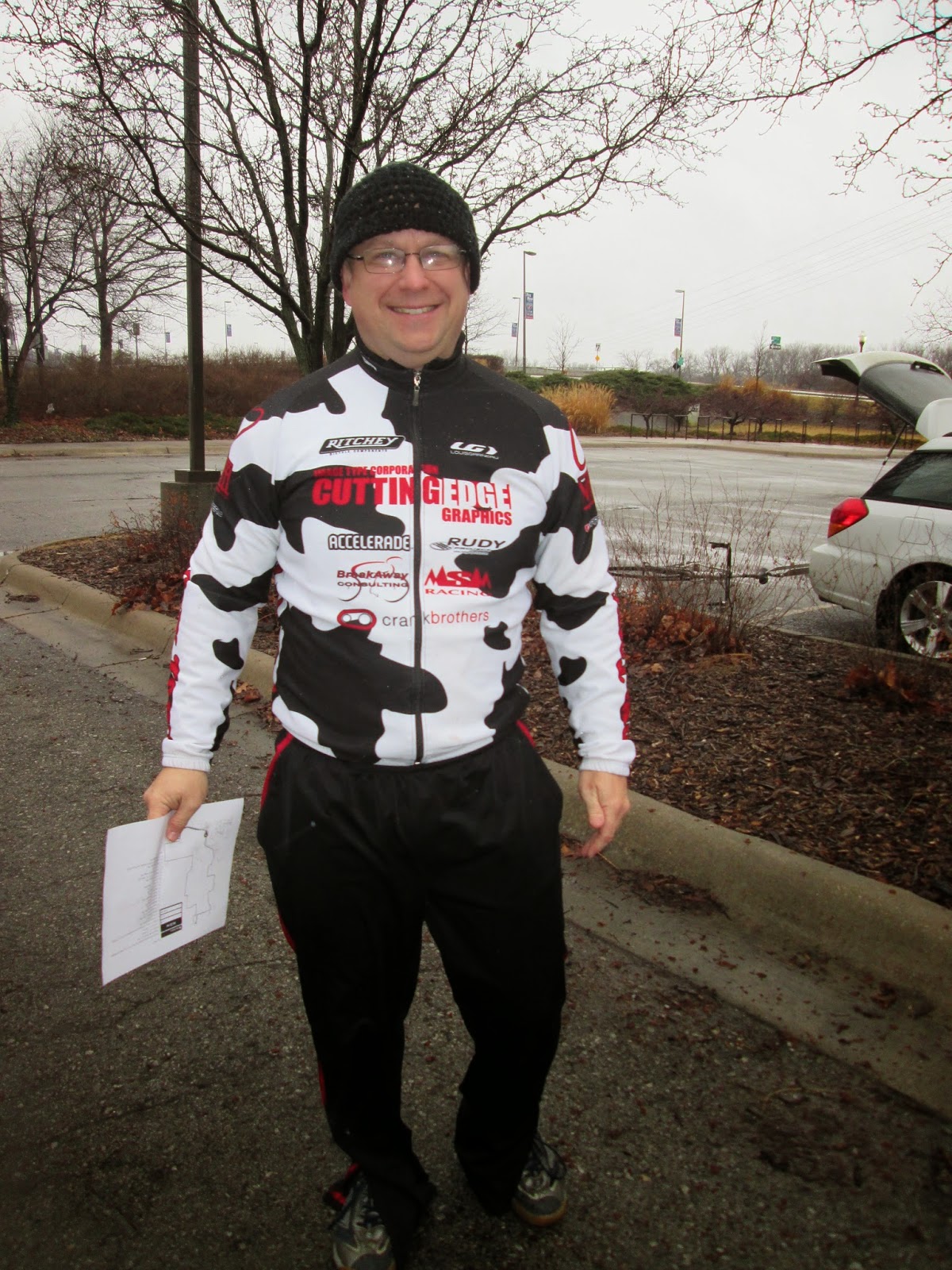 Gerard was on hand sporting his new custom made skull cap.  He would need it later in the day for sure has temps slowly fell from a starting temp of 33 degrees.  It would later drop to around 26 but the 30 + mph winds made it feel more like single digits. 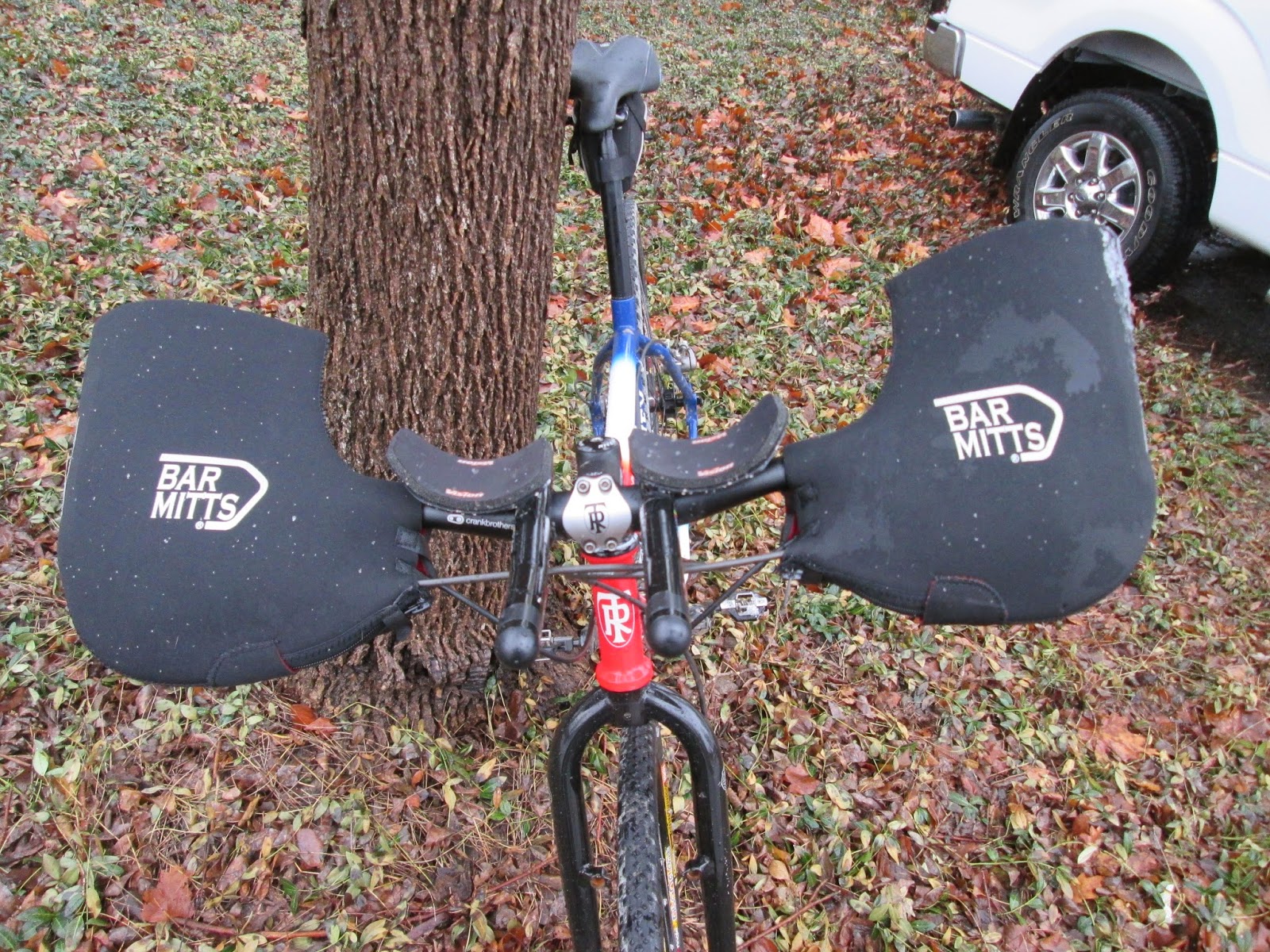 In preparation for CIRREM I brought out my new Bar Mits that my lovely wife Carolynn bought me for Christmas.  It has been so warm that I have yet to use them.  I am glad I had them today especially after my cogs got all frozen and I had to remove my gloves. 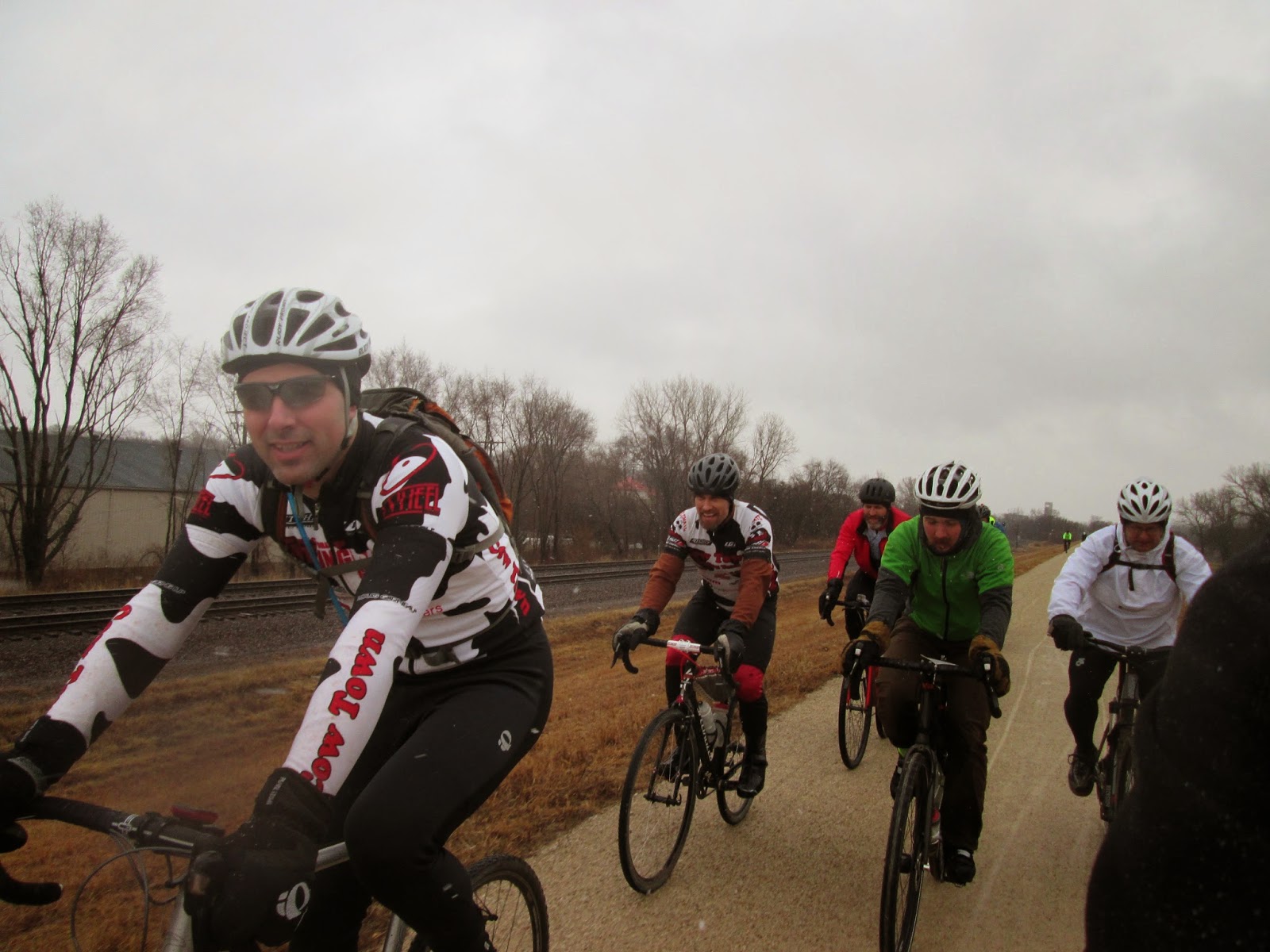 Jeff led the way for the first mile on the levee.  The levee which is usually a nice warmup became a real suffer fest due to the softness.  Instead of a nice easy 2 mile warmup we all basically had to endure what felt like a 2 mile climb of a steep mountain road.  Only this road was cold as hell. 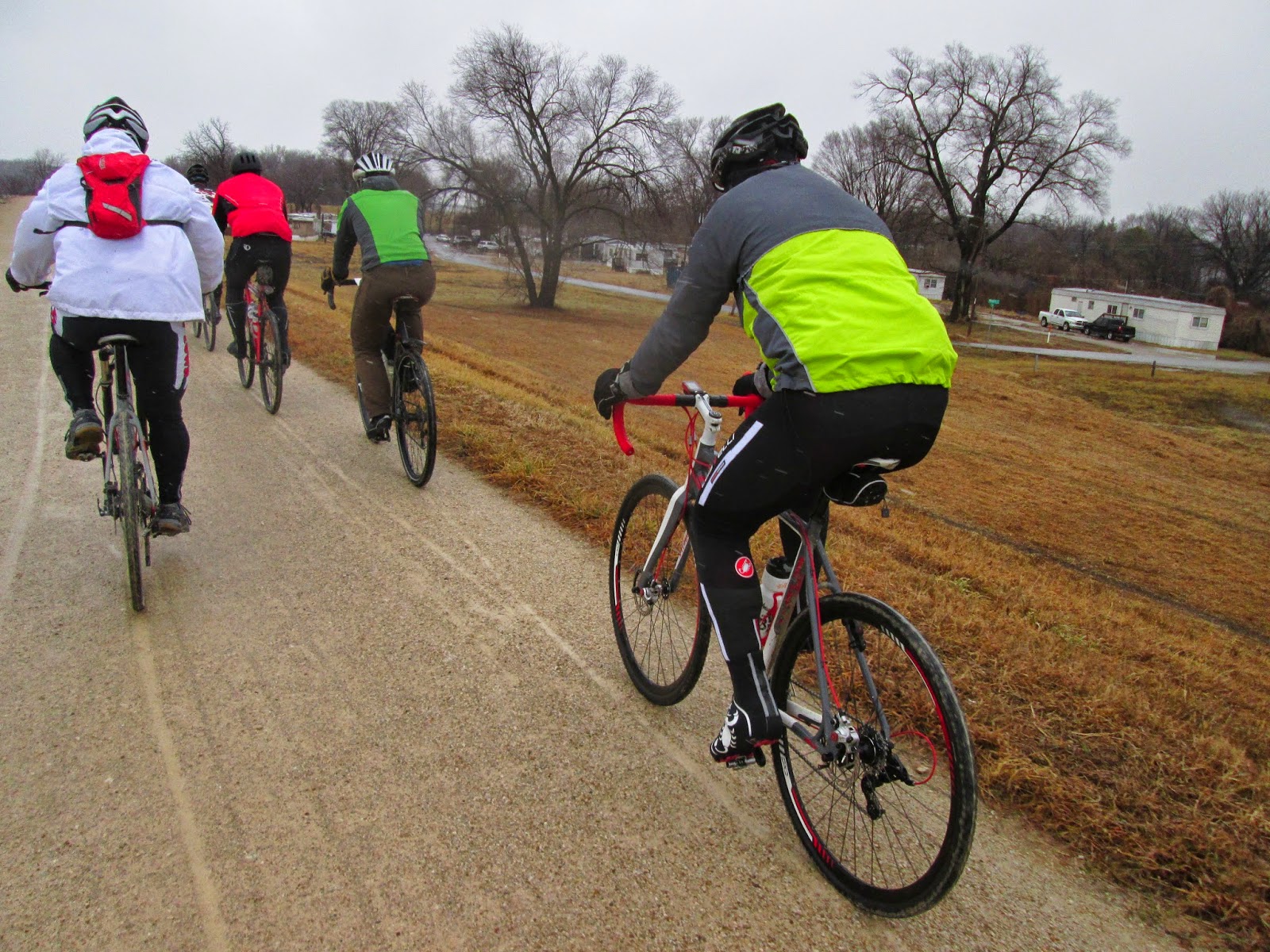 Most riders ride in the middle of the levee.  A quick secret.  If you ride right on the grass line it is usually a little harder.  Not always, but I used this as a way several times to bridge back up to the group after taking photos. 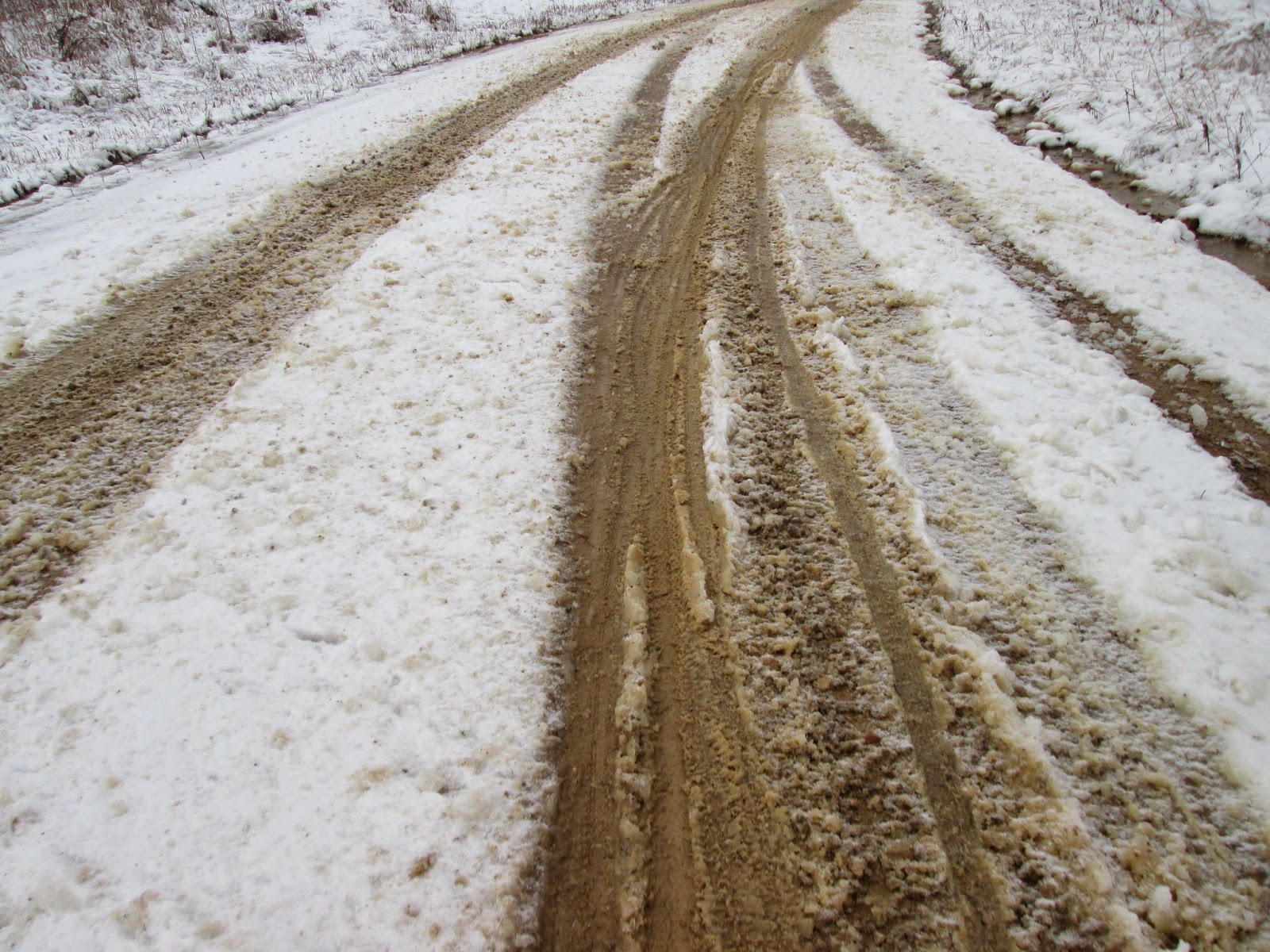 No snow in Lawrence but as we rode North the conditions changed to frozen slush.  These conditions were actually good.  It was when we reached roads that were thawing out and had water on them that it got demanding. 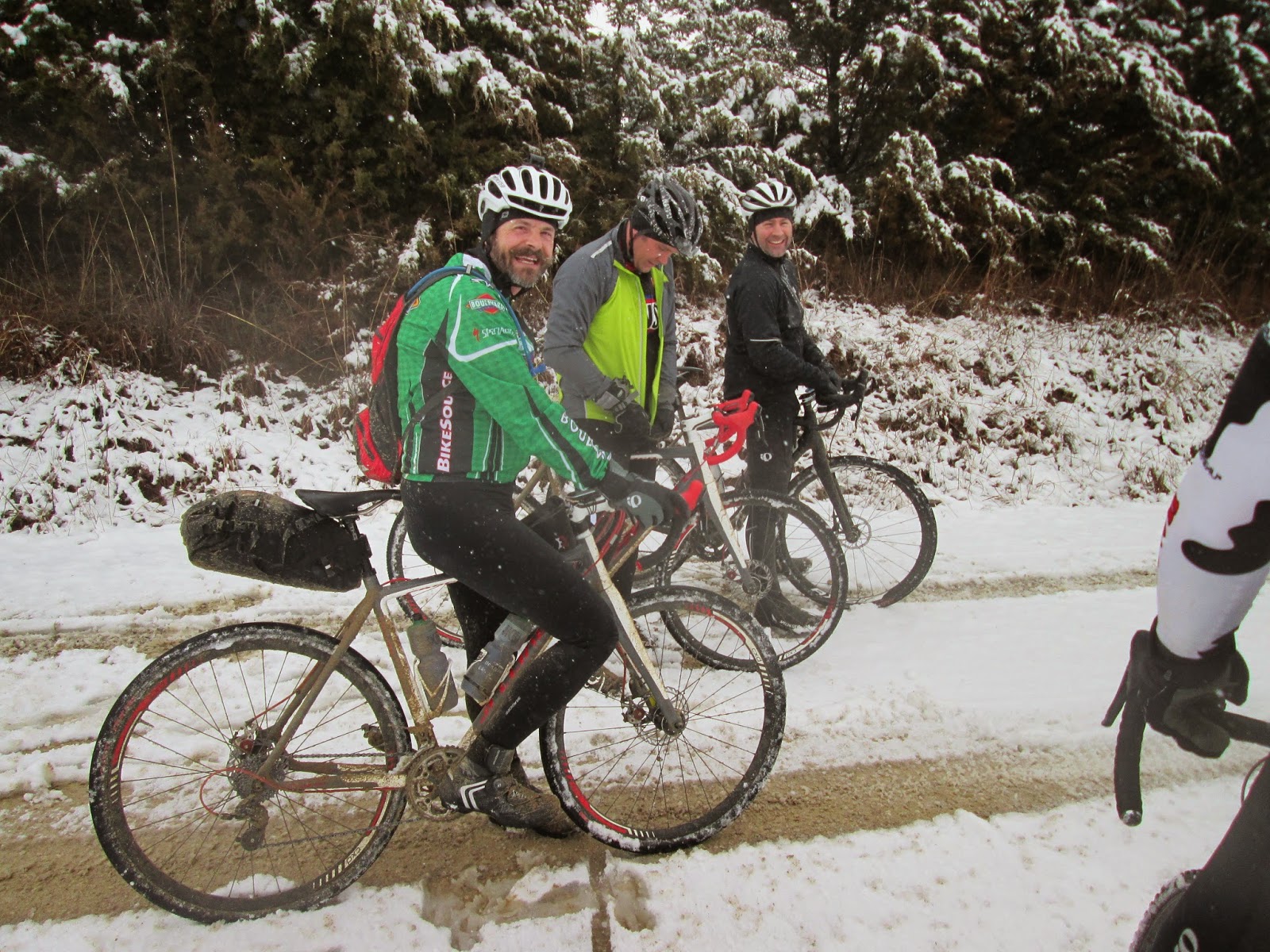 Several small groups formed as usual.  I was glad Bret and his group waiting for us.  I give them credit  for waiting but I just think they were lost :-) 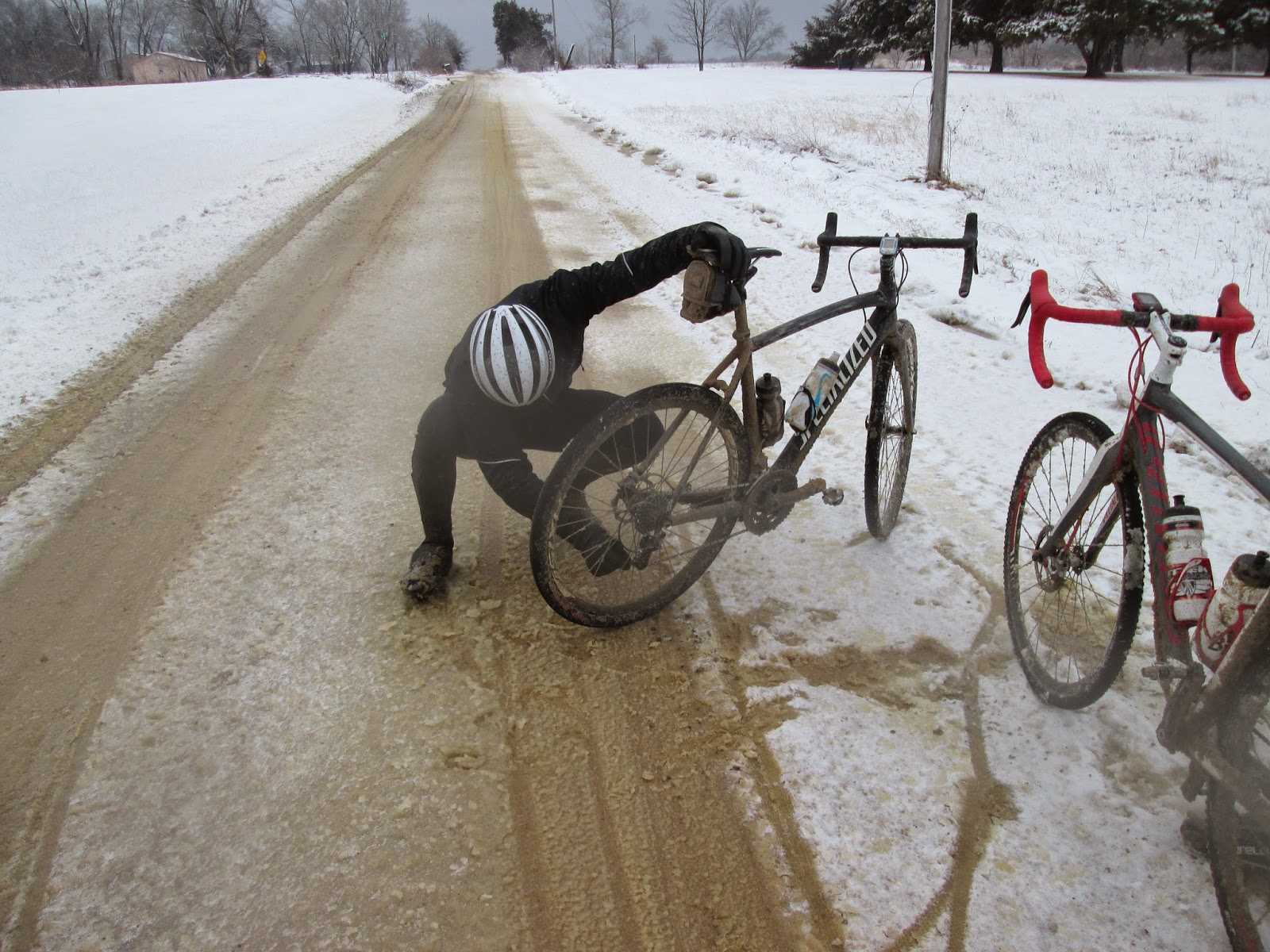 Problems started to develop on the way back South.  The roads were a mess and frozen drivetrains became common.  I believe everyone had to stop at one point to try and clean out the frozen gravel. 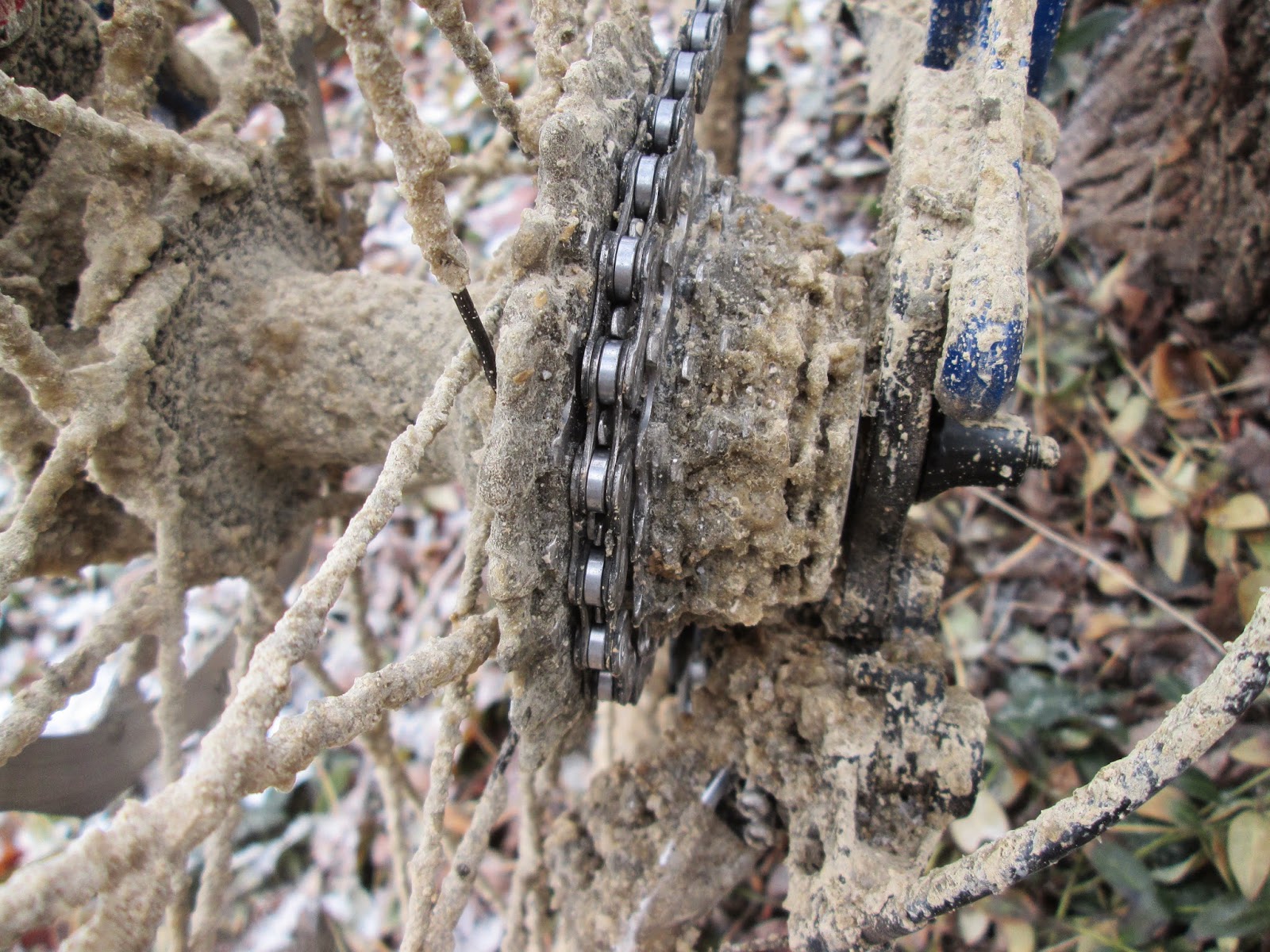 Sometimes I think it is better to just ride single speed when conditions are like what we had today.  I suffered miserably when I had to remove my gloves and try to dig out my frozen cog.  Today I really could have used a knife.  I always make fun of my son Christopher for caring a knife on rides we go on.  After today I will be caring one also. Sometimes you learn things from your kids. 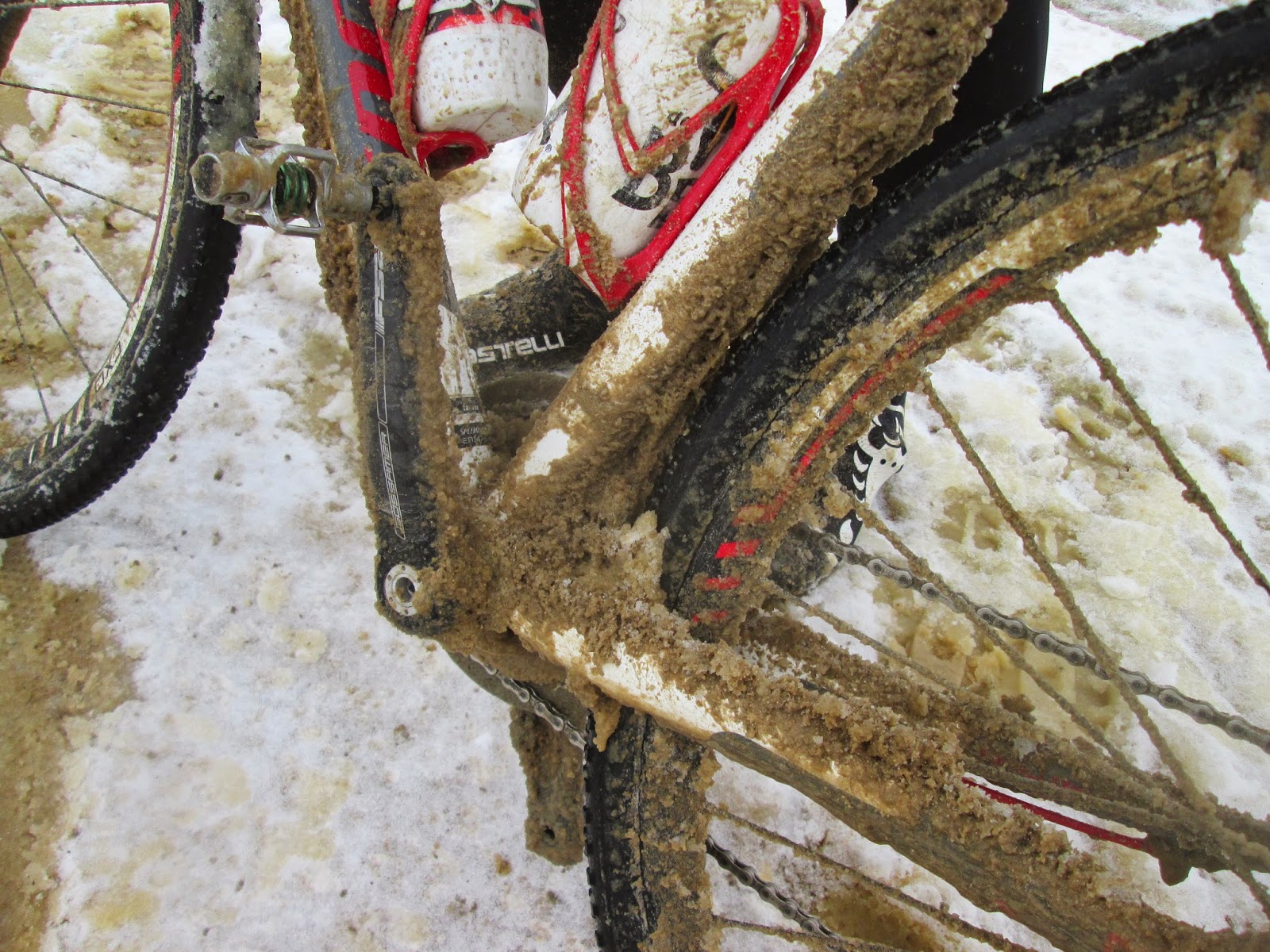 Frame clearance is very important when you are dealing with frozen gravel and water.  This is one of the reasons that I like to use a 29er with cross wheel set on it. 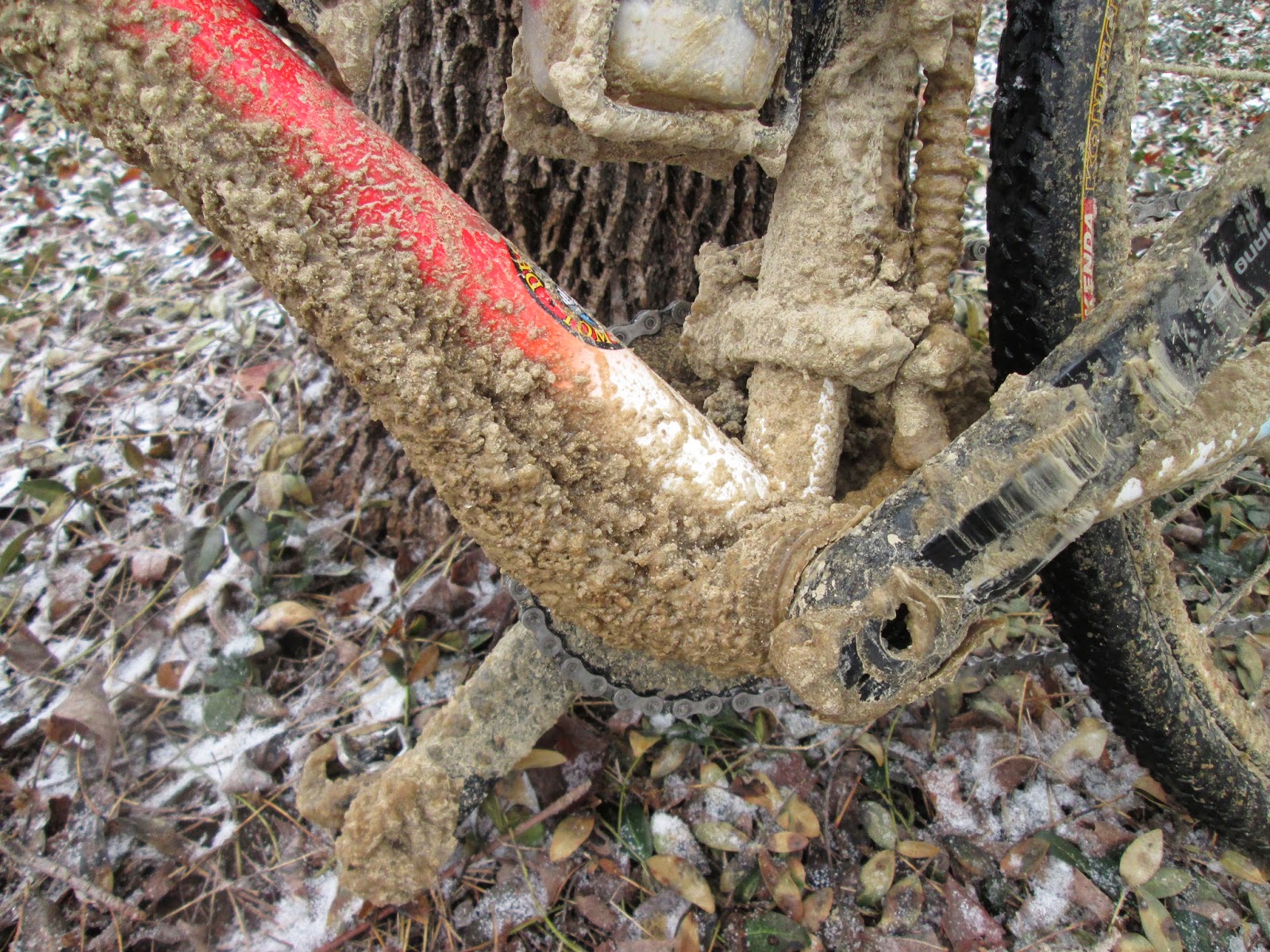 On my Ritchey P-29er I had a lot of buildup but I had no tire clearance problems.

Posted by dirtdobber at 2:45 PM No comments: