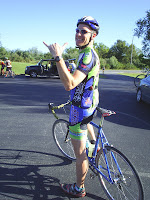 What a great day for a ride, especially on gravel. Today's Chamois Butt'r Gravel Grinder was well represented by several local teams and gravel enthusiasts. Plenty of happy faces before the ride started our of Smoke' N Davy trail head.

A route of just under 50 miles with plenty of hills which created some separation within the group. Today's lit

tle grinder felt more like a race at times, but was fun non the less. We dropped several along the way and waited a couple of times but the gaps were large by then. A suggestion was made to have two different rides - one f 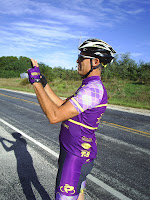 ast, one slow. This is a good idea and we will make every effort to find some more ride leaders to make this happen. Maybe also have shorter route for the slower group was also suggested.

The gravel roads north of Smithville Lake offer a wide variety of routes. We look forward to having another gravel grinder there soon. Thanks to Curt Shelman for creating the route and leading us along the way. Thanks to Paceline Products for their continued support and for making the best skin lubricant out there.

Pictures from the day....