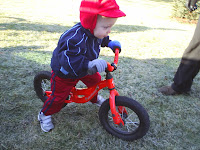 Sundays ride start at Curtis' house. Temps were in the 20's but the sun was coming out and it looked like it was going to be a great ride. Bill handed out maps and Curtis covered the course route before we headed out. Little Martell was dressed and ready to go, but his darn rig did not even have pedals.... 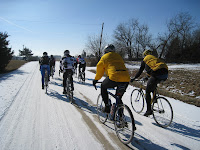 avel Grinder, hosted by Bill Anderson, traveled from the University of Kansas campus along rolling twisting gravel road to the sleepy little town of Lone Star. Some nice groovy gravel with many sections still snow packed with a thin layer of snow were encountered along the ride. After a short loop around Lone Star Lake we headed back rolling along on the snow packed gravel and back country roads.


Ride went very smoothly except for..... Mr. Pot Pie sprung a leak early on the ride. Don't you hate it when your bladder leaks. Poor guy had a frozen water fall coming out of his jacket the entire ride.....We went slightly off cour 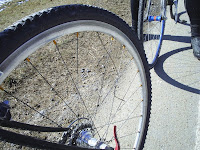 se Sunday. GPS said we were on route, but Bill's sense of direction and the a printed course map said were heading in the wrong direction. We opted to go with the GPS and ended up added about a couple of square miles of road. I don't the added miles bothered anyone, especially our single speed rider as he had the perfect 46 x 16 gear for the road.... Along that stretch we encountered our other small problem. A broken spoke. But Dan's build job was first rate and only required a wrapping of the spoke to get us going again.

the 23rd Street Brewery. The promoters of next weeks Chucky's Challenge were also on hand. They had just finished up 4 days of riding and needed some recharging. The special of the day was "Fish Bowls". 60 oz of your favorite ale for $6.00. Personally I was not man enough to finish my Fish Bowl, but Dan, Doug and most of the others had little problem. Heck, even ole' Jeff Arnaud finished his but I think he did have some help from his GF.

Great ride, fine food and good times. Thanks again to Bill and Curtis. We will see everyone Saturday at the Chucky's Challenge up in Jamesport, Misssouri.

Here are some pictures of our ride.

View all
Get your own
Posted by dirtdobber at 3:44 AM